Isn’t it funny how we all like our particular cups for our morning coffee…at least I do. The Crankee Yankee and I have cups ranging from years before we were married to the present day.

Between us we have a pleasant company of coffee cups; the Crankee Yankee has one Pembroke Corgi cup he loves, even though the handle broke off years ago. I bought him a new one; different corgi and different colors.

I had a creamy white pottery cup with gray accents and a pretty scallop on top of the handle that I bought in Maine. Unfortunately it smashed to smithereens during one of our moves. I traveled back up to the store I’d bought it in, only to find that the artist no longer made that style. But I did buy one of her new ones; a sea-blue mug with the same charming scallop on the handle.

We have a large black and white cat cup given to the Crankee Yankee from his daughter one Christmas, and I have a similar large cup striped in red and green, given to me one Christmas from a dear friend.

Then there is a blue pottery mug with a clever little ceramic worm on a ceramic book; get it? A bookworm mug! My mother gave it to me one year, and of course I eventually broke the worm off by mistake. But when the Crankee Yankee and I were cleaning out Mom’s and Dad’s house after they were gone, I found that she had had one as well; with the intact worm!

Among all the stuff from the house was a white mug Mom gave Dad one year that has a dancing couple on it over the words “I’d Rather Be Dancing!” Mom was a huge Edward Gorey fan, and she met a woman who owned a shop full of Edward Gorey memorabilia. They had a wonderful conversation about him, and the woman sent Mom a white mug with black “*fig bashes” all around the bottom of it:

There is also Mom’s “elegant lady” cup; a fragile English porcelain tea cup painted with springs of lavender. And from my single days in my 20s, I still enjoy my old “tree of life” mug and a hand-painted mug in blues and greens I bought from the artist.

One year I was given a B. Kliban Christmas cat mug: 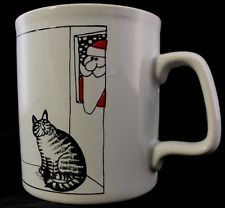 I had that mug for decades and loved it. Just a few months ago, one of our cats, Bailey, was on the counter by the coffee pot and the mug. Bailey, being Bailey (he loves to knock things over or push things around), knocked it to the floor where it was broken beyond repair. (Bailey was not punished for this, as cats will be cats.)

I hated to lose that mug; it was my favorite. But I went to faithful old eBay, and found one. I know that I could have just gone to the B. Kliban web site and ordered another one, but I wanted one with some history. Behold and lo, I found one and bought it. So my Christmas cat mug is back in another iteration, a la **Doctor Who.

This very morning I am drinking coffee from my blue mug with the scallop on the handle. To my fellow coffee drinkers and coffee mug lovers: “drink coffee each day from a favorite cup. It always tastes best that way.”

*If you too are a fan, you’ll know what fig bashes are.

**From Wikipedia: Doctor Who is a British science-fiction television programme produced by the BBC since 1963. The programme depicts the adventures of a Time Lord called “the Doctor“, an extraterrestrial being from the planet Gallifrey. The Doctor explores the universe in a time-travelling space ship called the TARDIS. Its exterior appears as a blue British police box, which was a common sight in Britain in 1963 when the series first aired. Accompanied by a number of companions, the Doctor combats a variety of foes, while working to save civilizations and help people in need.