I wrote this years ago, and I can tell you straight up that I still hate robots.

I have hated robots ever since my cousin Stevie locked me in his bedroom and set his walking robot after me when I was two years old. Quite frankly, robots give me the creeps. Any time I see a new robot being tested I go right into 1950’s robot invasion mode.

The fact that the clever folks (seemingly all over the world) are busily building all kinds of creepily human-looking robots gives me the willies. I think, ‘oh sure, great idea now, but just wait until the robot overlords program them to kill all humans!’ 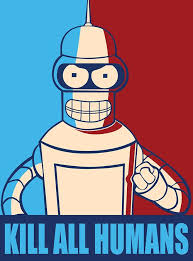 I despise vacuuming, and I know that having a Roomba to automatically vacuum would be extremely handy, but I do NOT want one in the house. I look at them on TV and think of how they may have been secretly programmed to open files on the computer, steal identities, short-circuit other machines they don’t like, and, of course, kill all humans.

Here it is—and it even admits it’s a robot; check out the “iRobot” label:

Oh, and I’m sure that the cats would love riding around on it, as seen in many commercials and cat videos.

Then I think of the possible robots I already may have in our home but don’t think of them as robots….could it be the toaster? The computer? The ELECTRIC TOOTHBRUSH?!?! What would happen if just one of them communicated with all the others late at night to plot a robot rebellion in our house?

Think about it: the toaster could kill us with poisonous black toast, the computer could suddenly reach out and strangle us with its USB cable, and the electric toothbrush could brush our teeth down to nubs and then abrade our gums, causing us to bleed to death! (The horror!)

I don’t trust any of them. In the movies, nothing good ever comes from the dang things….ok, now I’m going to go throw out the toaster. I don’t like the way it’s looking at me…..