The Crankee Yankee and I have been feeding and sheltering the “outdoorsies” for years. The five or so cats, the squirrels, birds, skunks and sometimes a raccoon or two show up to feed. I’ve learned over time to walk slowly, and announce myself into the back yard with my signature call that goes something like this: “tsk, tsk, tsk, psst, psst, psst.” That way they know it’s me coming out with their food and water.

Scooter, the plump black cat with a few bits of white under his chin, has been the most shy. He usually hides under the low branches of the pine tree on the other side of the stone wall when I walk out. Once I fill the food bowls and water and walk back into the house, he’ll come out and eat.

Over time he has come closer. As I do with any animal who is new to me or shy, I put out my closed hand out to them so that they can sniff my knuckles. It took Scooter a long time to do that, but afterward he became less shy. These days he wants to be patted, stroked, scratched under his chin, and he licks my fingers from time to time.

It is humbling to see and experience trust from a shy animal. I don’t know if Scooter belongs to anyone, but he is a very healthy-looking cat and is plump with soft silky fur. As with the other two cats who we fed and sheltered years ago; Plumpy Nut and Tinker, they became part of our family and are now indoor-only cats. At this point, it is enough to have Scooter trust me as he does.

As I really can’t imagine SIX cats in the house, I will just keep on what I’m doing, show Scooter love and affection and just see how things go. For all I know, he belongs to someone who adores him. For now, he freely eats and drinks at our house as he wants to. The Crankee Yankee and I fixed up a little shelter just for him, which looks like this: 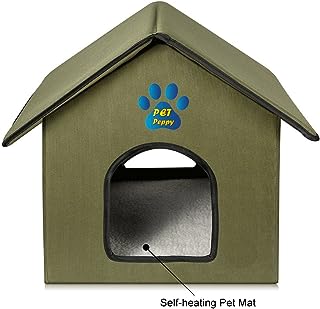 We’ve used them before, and I hope that, if Scooter does not have a home, he at least has a way to stay out of the rain. Trust, especially from an animal, is a gift like no other. I truly don’t know how things will work out with Scooter, but we will just go on as usual.

More on this later as things progress.