All I can say about this tour is wow, wow, WOW!!! There was so much to see and do, and during the day, there was a river show. We all sat on benches and watched the show that explained all the different peoples of the islands; Samoans, Figians, Hawaiians, Tahitians and of course the early Polynesians. Later on, there was hula dancing and songs, and then later on, the amazing men and boys who do the fire dances.

Some brief history of the Polynesian Cultiral Center: As early as 1844, missionaries from The Church of Jesus Christ of Latter-day Saints (popularly called the Mormons) were working among the Polynesians in Tahiti and surrounding islands. Missionaries arrived in the Sandwich Islands (Hawai’i) in 1850. By 1865, the LDS Church had purchased the 6,000-acre plantation that encompasses all of Laie.

The LDS Temple in Laie — started in 1915 and dedicated on Thanksgiving Day 1919 — attracted more islanders from throughout the South Pacific. By the 1920s, LDS Church missionaries had carried their Christian teachings to all the major island groups of Polynesia, by living among the people and speaking their languages.

The Polynesian Cultural Center is an homage to all the peoples of the islands; there are lessons in making flower leis, coconut leaf headbands and fishing with a handmade net and more.

I had seen the “fisherman’s hook” everywhere in Oahu; lots of people wear them: 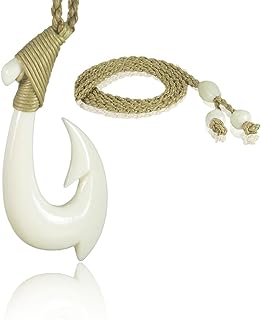 *”The Hawaiian fish hook necklace is commonly known as Makau. As its design suggests, this handmade Hawaiian Jewelry symbolizes a connection between the wearer and the ocean. The jewelry is a symbol of energy, strength, prosperity, abundance, and good luck. Since the ancient Hawaiian livelihood was very much dependent on the ocean waters, so, the fish hook necklace signifies a deep respect and love towards the oceans.

As per the ancient Hawaiian belief, it also signifies that once it is worn, the fish hook becomes a part of the wearer’s spirit. Hence, on being handed over to anyone in the wearer’s family, it establishes a sacred, spiritual link between the closed ones and bridges the gap between time and distance. Therefore, this handmade heirloom Hawaiian Jewelry forms a very integral part of a family throughout the generations.”

I never knew what it meant until the meaning was made clear during the river show. In the beginning, there was only one big island. During the show, the chieftan picked up a huge fishhook and mimmicked cutting up the big island into five separate ones; Oahu, Molokai, Maui, Lanai, and the “big island,” Hawaii.

At dusk, there was a magnificent luau, featuring kalua pig, baked chicken, pasta salad, coleslaw, poi (made from taro, a local root). And no, I did not eat the poi, but I did eat a poi biscuit!

It was a fabulous day that I will never forget.