So what exactly is a didgeridoo? According to Wikipedia: “The didgeridoo is a wind instrument developed by indigenous Australians of northern Australia potentially within the last 1,500 years and [is] still in widespread use today both in Australia and around the world.”

“It is generally made from a *termite-hollowed branch made from many different eucalyptus varieties and also from some other tree species. Eucalyptus is the preferred timber to make a didgeridoo because it is very hard wood and gives good resonance and timbre.”

Didgeridoos can also be made from bamboo and man-made materials (mine is the latter). I think that the music made from a didgeridoo is something you either love or hate; much like Scottish bagpipes; you either love the sound or hate it.

So how did I fall so deeply in love with a didgeridoo all of a sudden? The Crankee Yankee and I had gone to the Sunapee Arts and Crafts fair recently, and there was a guy there who makes, sells, and teaches didgeridoo. The sound he made was hypnotic; there was of course the deep thrumming of bass notes, and also clicking and twangs and whistles. You could also hear the sounds some bush animals make as well; howling, roaring, yipping, running and so on.

I felt as though I’d had a musical epiphany right there; all I could think of was, ‘wow—I have got to get one of these!’

So, since I wasn’t too sure that I would end up becoming a rock star didgeridoo player, I ordered a pretty inexpensive one (sans termite holes). I found that there are lots of   videos on playing the didgeridoo, so each day I “go to class.”

The tricky part of playing is breathing. In order to sustain the sounds, you learn what is called “circular breathing.” Those who play wind instruments will recognize this technique; it’s a way of controlling the breathing so that the music sounds continuous with no noticeable breaks. I’m still working on that one!

Each day since I got my didgeridoo (or “didge” as the cool folks say), I’ve practiced making the sounds that comprise the unique music. Best of all, for the first time in a long time, I’m enjoying music again.

Below is a picture of a didgeridoo player, and yes—most of the didges are that long (mine is a scant 45″ long). 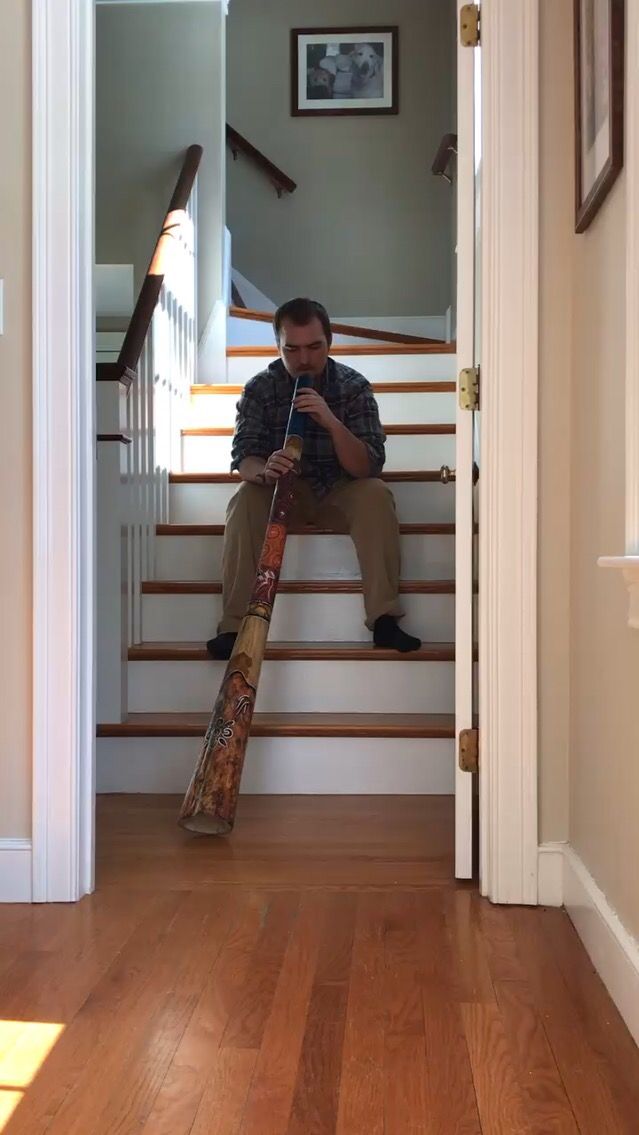 So there you are—this is how I came to own and love a didgeridoo. There is something both primal and soothing about playing any instrument. Sometimes music will call to us much like a person or pet will. We may not know how long the relationship will last, we only know that we are deeply in love and must follow that love.

*The holes that termites make in the wood just adds to the didgeridoo’s unique sound.

One thought on “I’m in Love With a Didgeridoo”